We all have that one Uncle we know (probably more than one) who keeps on reminding you how terrible India is. He tells you about how every government authority takes bribes- from the RTO to the ration shop to the municipality. He will tell you how no government department does its job well – the potholed roads, abysmal conditions at government schools and poor healthcare all being examples, unfortunately, to support your uncle’s theory. It is hard to argue with him, for he is correct. Things don’t work. There is no justice. Power talks. Equality is for the textbooks. All of this, even though uncomfortable to hear, rings somewhat true.

However, the uncle goes on to say this: “Nothing will ever change.” He is convinced that our society is damaged irreparably, and India is destined to live in misery forever. Uncle Cynic goes on to doubt almost everyone and anyone who is trying to improve the country is branded as someone with a hidden agenda-either political or something else. 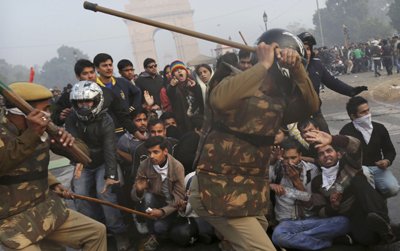 This is where i think the uncle gets it wrong, horribly wrong. For it is one thing to point out the problems, it is quite another to give up trying to fix them. Cynicism is not a counter-argument, it is an attitude. For the fact is we still have good people in the country: in society and even in government departments. It is just that they are crushed, by the powerful at the topmost positions in our country.

I don’t want to give you the reasons why you must support Anna Hazare. It is almost beneath Anna’s dignity that he actually has to beg or make a case for support when he is fighting for you, against an abusive, corrupt regime. Still, let me do a quick recap of the facts.

Anna did a fast in April 2011, which became the nation’s movement and spread virally. Concerned, the government agreed to make a good Lokpal Bill, shook hands with the activists and in principle agreed to Anna’s version, designed to truly check corruption. Since then, the government has insulted Anna’s team, thrown away their draft, and come up with its own almost pointless draft of the Lokpal Bill. The draft the government is presenting to Parliament will not check corruption. Only 0.5%, or one in 200 government officials are under its purview. Your corrupt ration shop, RTO, passport office, panchayats or municipal authority will not be covered. State scams will not be covered – yes, the Adarsh society scam or the Jharkhand scams are all out of its purview. The prime minister is excluded as well. Ever heard of a corruption law in a democracy that only applies to a certain section of people and not the big fishes who loot the country of trillions of dollars.

The government is throwing magic dust in your eyes – and counting on India’s illiterate and ignorant to not know the difference. However, you reading this are educated. You know when wrong is being committed. A bad Lokpal Bill may not affect you today – but tomorrow it will hit you when your child does not get a college seat, when your hospital gives shoddy treatment, when your government work doesn’t get done. We live in a poor country – poor not because we don’t have what it takes to be rich, but because our leaders have let us down. We have given them too much power, and they consider our vote as a mandate to steal and be incompetent. They hate accountability. However, without accountability, our progress will stall. There are countries where the average income per person is 50 times more than in India. Don’t we deserve the same, before being called an ‘economic superpower’?

Thus, whatever your personal view on Anna, it is not him but his cause that needs support. Till date, the UPA Government has looted more than 1.2 Trillion USD of the taxpayers money in scams and as soon as one goes out of sight, the other rises. It is time to show the government the power of a democracy. The government can crush a few activists. However, it cannot crush India on the streets. A peaceful, firm, decisive protest is every Indian’s birthright, and must be exercised in times of need. Come this winter session of Parliament we Indians have a job to do. We have to save our country’s future.

A word for the government too. Just what exactly are you thinking when you are trying to shove an impotent law down people’s throats? And what makes you feel that threatening, crushing or insulting Anna will take away people’s need to rid India of corruption? Anna did not create an anti-corruption sentiment, he merely tapped into it. Crushing Anna will not take away that sentiment. It will just make it fester more. Right now, the movement is still controlled. By going back on your word, displaying arrogance and not listening to the people, you are risking the country’s descent into chaos. Things might just go out of hand and be careful. Accountability is much easier to deal with than anarchy. Fix the Lokpal Bill now, please.

Finally, for the people of India, it is time to prove Uncle Cynic wrong. There is a bigger truth than his ‘nothing ever changes in India’. That truth comes from the Gita, which states “Nothing is permanent”. The Gita also says, “When the pot of sin overflows, something happens to restore order.” Now, it is up to you and me to determine if the pot of sin has overflowed and is it time to restore the order, as it is meant to be. It is for you and me to say what it means for Indians to act out their dharma. And ,only you and me, will decide if it is time to come on the streets.