12 months later, we are talking about the closest period in Indo-US Relations since 1947. Ties are flourishing, crucial deals are being signed and there is hope for even better relations.

But what happened in these 12 months? Just one thing changed, Modi. The man who was once declared a religious extremist by the US Administration is now one of the US President’s newfound friend. ‘Barack’ and ‘Narendra’ are the new talk of the town and their friendship is the envy of the world, from Beijing to Islamabad. But, neither India nor the US has any time for symbolism? The US needs to recover and India needs to reclaim its position as the emerging superpower, and for that, these visits and symbolisms must yield results.

When Modi had visited the US in September, his critics wanted to discredit him by asking where the substance was. They argued that Modi’s visit was about style, that the optics overpowered the real issues that were bedevilling the relationship. When Modi invited Obama as the chief guest at the Republic Day celebrations, the critics came back arguing that what was the point of inviting Obama who had become a lame-duck President with the defeat of the Democrats in the November 2014 elections. And even if he still is the powerful President of the world’s most influential country, economically and politically, what will his visit give to India? News channels flashed the now cliche line, “What will the Indian Aam Aadmi Get?”

However, this time Modi has taken the critics head on, showing how far ahead he is of his critics. It shows how this shrewd, yet intelligent politician can also play the dual role of a Prime Minister who truly understands the nitty-gritties of modern day politics and diplomacy. Within just 6 months of becoming India’s Prime Minister he has entered the clique of the world’s most powerful and influential leaders, who not only talk big, but deliver even bigger.

It was the optics of his September visit that convinced the Americans that this man who could talk, could also deliver. The Obama Administration recognized that after years of disappointment from Manmohan Singh, they were now getting an interlocutor in Modi who understood how important it was get the US-India equation right, and he was ready to deliver with his immense cache of political capital. Then came the invite. The Republic Day was just an event, the real deal was the second Obama-Modi Meeting, the meeting to finalize the hopes and optimists created in the first. Modi saw the opportunity, the opportunity to make India a formidable ally of a US trying to counter the growing Chinese influence in Asia. This second time, Modi has made full use of the visit, giving more than anticipated.

This second meeting has been one of bonhomie and chemistry, and in the end it’s all about chemistry. And if the chemistry is right, nuclear deals and the economy will fall into place, apparently.

If the protocol breach and the unexpected bear-hug at the tarmac set the tone of the visit of the US President, the stroll in the rose gardens of the Hyderabad House confirmed a deepening of the bromance between Obama and Modi, or ‘Barack’ and ‘Narendra’.

But, as Mr. Modi knows, that is far too less to convince the Indian Media that Obama and Modi share a good friendship, a friendship which will change the dynamics of the Indo-US Relation.

At the joint media interaction, Modi said he believed that relations between countries depend less on “full stops and commas on papers” and more on the rapport between leaders. “How much they know each other, how is their chemistry, these are very important. Barack and me…” he said as jaws dropped and the media went into a tizzy. He called him by his first name, something done only by close friends in the global political clique.

This time, Modi delivered symbolism, yet again. But more importantly, he delivered substance, taking the Indo-US Relations to the new level, a level only few countries in the world can boast of.

Manmohan Singh’s efforts to operationalise the nuclear deal, his self proclaimed biggest achievement while in office, were scuttled by his own party more than by the opposition.

Modi has put an end to that nonsense, demonstrating once again that where there are national interests, political interests must be kept away. His bear hug to Obama is a reflection of the reality that only a minority in India have been able to time and again articulate: there are no real substantive issues dividing the two democracies. For sure, there are differences, but these small differences are only on strategies. And it is this realisation that made Modi and Obama take the plunge today and sort out issues ranging from the nuclear deal to defence cooperation, issues which should have been sorted during the Singh era.

With Obama using his executive powers to roll back the condition that US authorities be allowed to monitor use of nuclear material purchased by India, even from third countries, and the US agreeing to India’s proposal to build a risk-management insurance pool of Rs. 1,500 crore to provide cover to suppliers who shunned the civil nuclear agreement because it made them liable to pay compensation in the event of a nuclear accident, a great leap forward has been made. The nuclear cooperation deal can finally be put to use for national interests.

Bilateral defence cooperation has also been energised with the two states agreeing to extend the Defence Cooperation Agreement and identifying four projects under the Defence Technology Trade Initiative (DTTI) for joint production and development and exploring cooperation for jet engines and aircraft carrier systems.

And probably, one of the most important takeaways from the joint statement is the Hotline. Now, with a direct hotline to the US, India has taken the relation to the next level.

These are just some of the significant agreements signed between India and US. The others include cooperation on a variety of issues, from education to connectivity. 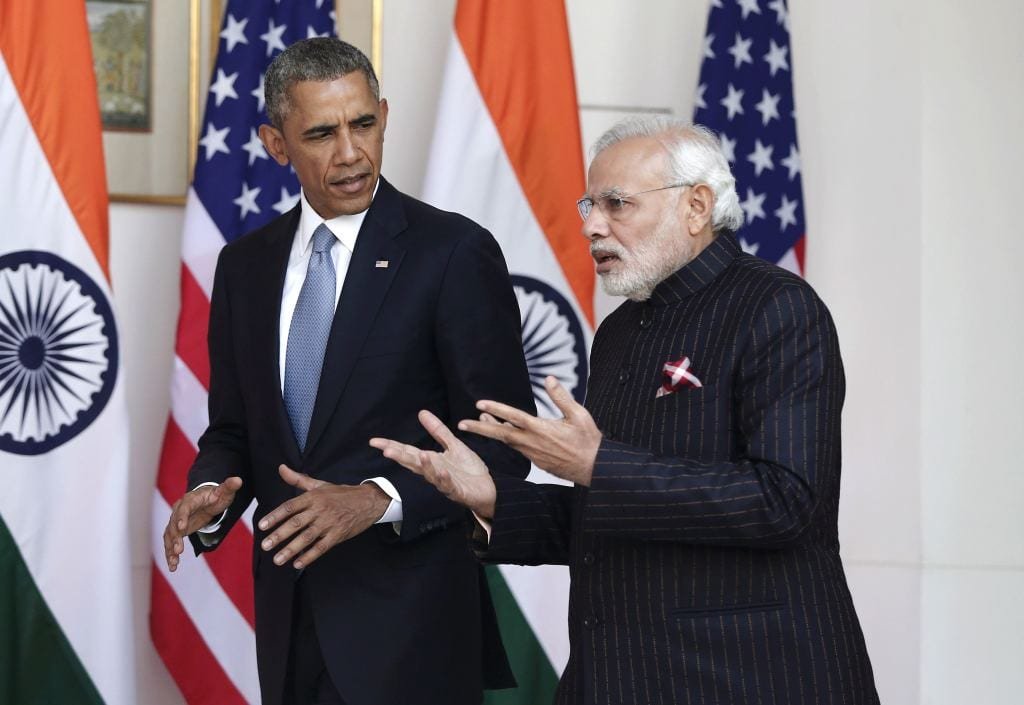 Where the two leaders are now looking at the US-India relationship through the prism of the strategic changes in the larger Asia-Pacific and Indian Ocean region, the world looks enviously at a new relationship, a relationship which has the potential to send waves of impact across the world.

There is much to look forward to as the Indo-US relations move to another level now. A confident new India is shedding the diffidence of the past in its dealings with America. And that can only be a good thing for the two nations. For now, with folded hands, I thank the POTUS for his visit and for his commitment to our ties. And Modi, hats off once again sir.