The decision has been made, in just 30 days of taking power. Narendra Modi is finished because in his first month in office he has not been able to transform India and bring the “acche din” he promised. And who makes this decision? Not the 1.2 Indians who voted the BJP to power but 12 political analysts scattered across 12 Indian Top News Channels. These so called analysts have been missing in action since nearly a month, but as soon as the rail fare hike is announced, they are back, back to criticise the very man who they thought couldn’t win the election. Discredited Marxists, editor in chiefs wrapped in the cloaks of Congress’ age old socialist ideology and ‘secular’ political philosophers manifested themselves on news channels to gleefully taunt the Prime Minister.

‘Where are the ‘acche din’ Mr Modi? The truth is that the Modi Government has fooled the people of this country’. ‘Hum toh pehle hi keh rahi the ki Modi sirph Ambani aur Adani ke liye kaam karta hai. He is only a corporate man.’ Political leaders rejected by the Indian Electorate were gleefully accepted by the Media. What puzzled me was that not a single TV anchor (in English or Hindi) tried to explain why the 14 per cent increase in the price of railway tickets had become necessary, though everyone knows the kind of losses the Railways suffer and the drastic improvement needed in the Railways, pending since the days of 1960 and 1970. Neither did they listen to any justifications for this from the BJP spokespersons and logical economists.

When I tried to analyse why were the sensible graduates and scholars sitting in those good chairs in the newsroom were trying to do this, clarity quickly dawned. It is that old gang again. The same people who predicted that a Modi Government would never come to power, the same people who said India would be engulfed in fire if he did become prime minister, the same people who chanted Secularism when anyone said, ‘Abki Baar Modi Sarkaar’.  These same people now want to ensure that he does not stay prime minister too long. So silly statements by novice ministers are magnified and converted into material enough for 1 hour long primetime debates. And any sign that the Prime Minister may really be signalling a new direction is ignored. His first speech in the Lok Sabha in which he reminded MPs that they represented the hopes of a billion people was mostly ignored by political pundits both on TV and in the newspapers. Why? It was the best speech made in Parliament in at least a decade. And if anything is good, it does not deserve any air time on any Indian News Channel. 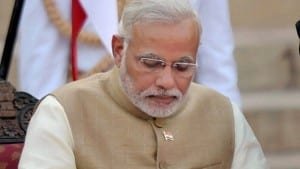 Most political pundits in the media do not want to admit they may have misjudged Modi. They will be very disappointed if in the next five years there are no pogroms against religious minorities. Even a minor incident will be hyped to the extent that it will seem like India is fighting a war.  So there was hysteria over the tragic killing of the Muslim IT professional in Pune by an agitated mob. Notice that almost nobody blamed Maharashtra’s Congress government for law and order, which is a State subject but everybody was quick to take digs at Mr. Modi who was blamed for inspiring ‘Hindu triumphalism’.

The people of India will give him more time because it is they who ensured that he became the first prime minister of India after 30 years to get a full majority. They bought the chant of ’60 days, not 60 months’. They chose their Modi Government. So he needs to communicate with them directly and more often. If this monsoon remains as bad as it is so far, the poorest Indians are going to suffer even more than usual and a contingency plan needs to be carefully worked out at the earliest. The Team India plan must be enacted immediately and with the help of the State Governments the huge piles of grains stacked in the warehouses of the Food Corporation of India must be distributed effectively. It is not good enough to start threatening ‘hoarders’ with dire consequences. Actions matter more than words.

It would be best for the Prime Minister to personally take charge of the contingency plan so that in rural and drought hit areas, there are provisions for free kitchens and other assistance for those who are most vulnerable. Even though inflation may rise, it must not hit the rooftops at any cost. We know you are a genius Mr. Modi, but now it is time to prove that to even your worst detractors. It is things like this that the Prime Minister must concentrate on without worrying about political pundits. They are not on his honeymoon.