On Sunday,the 27th of October, 2013 as the first bomb explosion was reported from Patna railway station the TV news media sensed blood. They got more than they were hoping for. Then there were more blasts. Crowds had already gathered in lakhs at the Gandhi Maidan for BJP’s Mega Rally in Hunkaar. The series of blasts killed 5 people and injured about 90 odd people. Some politicians were hoping the event would be cancelled and Modi’s Bihar entrance would be scrapped. Anchors like Bhupendra Chaube were hyper, screaming “politics over terror” when nobody even had the proper details. NDTV was repeatedly showing smoke blowing from a spot on the Maidan, from where hundreds of people were fleeing. Congress “politiciser” of terror attacks Digvijaya Singh was off the mark quickly to start tweeting filth, saying that the incidents made the rally a perfect start for Narendra Modi. Later Rajdeep Sardesai would tweet seeking maturity from politicians while he was tweeting like a hypocritical moron. CNN-IBN spread as much poison with the blasts as they possibly could. TimesNow was busy with their Youth Parliament; not getting into sensationalism. All of them, I repeat, all of them simply refused to see a miracle that just happened LIVE.
If you hear the Head of a team saying “We can’t do it” it is quite likely to alarm anyone. It would be like giving up. But sometimes it is because we are not quite aware of what that Head is thinking. We may have no idea of the situation that he is in. We shall see.
We all look at Sachin Tendulkar and we can immediately say he has talent. In his case we also know that this talent was nurtured since he was 5. He also practiced his related skills regularly from a young age. In a previous post I have shared the fact that skills and knowledge can be transferred. Talent cannot be transferred. So what exactly is talent? Talent is simply something a person excels in almost every single day from the early part of his life, and what makes the person what he is. Some say talent is natural but that is only half true. We look at Amitabh Bachchan and those who have seen his earlier movies know he has talent. We look at Uday Chopra … or we look at Sagarika Ghose… and we know instantly when talent for a given assignment or situation is missing. How do we know the difference?
It’s quite simple. You can teach someone to fight fire. You can teach them how to use an extinguisher and how to tell everyone to run down the fire exit. You can teach them how to use the water hose. You can teach them how to use a water hydrant. You can teach them how to evacuate a building in an orderly fashion. All these can be practiced, improved and excelled in. What cannot be taught or transferred is to stay “Calm under fire”. That is a talent. Even the best trained people can panic under fire and loose their calm. They can forget all the training and crumble. Some show calm under fire under extremely testing circumstances even if they face it for the first time in their lives. Watch an example in this video (4.20 mins):
http://www.youtube.com/watch?v=E8itHvXd0oM (Please right click on the link and open it in a new tab)
On January 15, 2009 US Airways flight 1549 (Callsign Cactus) was hit by a flock of birds and lost both engines. Capt. Sully Sullenberger’s last words were “We can’t do it… We’re gonna be in the Hudson”. The ATC couldn’t believe what he just heard.In the Hudson? In a rare case of taking charge Capt Sullenberg was handling the radio (normally done by a co-pilot) and also the aircraft. He knew he couldn’t have made it to any airport nearby and the Hudson River in New York was the only place to crash. He drew upon all his skills and experience and did something amazing. He was flying an unpowered aircraft in a ‘ditching’ attempt and landed it on the waters of the Hudson River. The flight lasted only 6 minutes. All 155 passengers and crew members were saved. They call it “Miracle on the Hudson”. It was a miracle indeed and saved lives. Sully Sullenberger and his crew were instantly national heroes in the US. What Sullenberger showed in a situation he was never before in was “Calm under fire”. It’s a talent. This talent is the most important when lives of others are in your hands, when you’re responsible for the safety and security of others. Coupled with Sullenberger’s flying skills, this talent was the force that saved lives.
The folks in the Indian media and some political parties who couldn’t see a similar miracle at Gandhi Maidan on October 27 are either blind or extremely foolish. There was a sea of people at the ground, lakhs still streaming in and few bombs were blasting here and there. In such a case there were many who thought the best course would for BJP and Narendra Modi to cancel the event and ensure the safety of the top BJP cadre. But neither Modi nor BJP cancelled but stayed the course. A cancellation may have caused greater havoc from a disappointed crowd who streamed into the ground even after the blasts to hear Modi. They not only completed the event but at the end Modi pleaded with the crowd to disperse carefully and peacefully. He advised them to reach home safely. Amazingly, the crowd, estimated at over 7 lakhs, did not panic. They did not run amok. They did not stampede. This crowd wasn’t 155 passengers on a plane. They were estimated between 7 and 10 lakhs. The image can show one the potential for a major calamity. 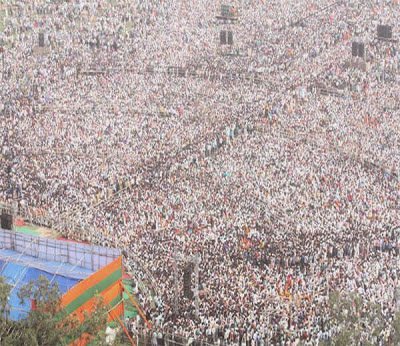 Character doesn’t develop in a crisis, it reveals it. That is exactly what Narendra Modi and others from BJP showed. They showed patience, courage under fire and kept a huge crowd under extra ordinary control, which even great leaders like Jawaharlal Nehru could not. The consequences of a stampede out of fear are unimaginable! Thousands could have been killed in a few minutes. Instead of recognising the maturity of the crowd and leadership that guided them our crony media folks were busy trying to score political points themselves. Every person who screamed “don’t politicise” was doing exactly that. A well known Indian journalist,  Rajdeep Sardesai even got Digvijaya Singh next day to heap more nonsense. Knowing the character of Digvijaya very well if Rajdeep still calls him to comment you know what his real motives are. And there are jokers in the media who were even suggesting BJP would be the beneficiary so fingers were pointed at them. Information so far reveals another Indian Mujahideen episode. And isn’t it ironic that at this time, the Indian Mujahideen’s co-founder and most dangerous member, Yasin Bhatkal is in the Bihar government’s custody, which is an arch rival to the Gujarat Government headed by Modi.
Nitish Kumar’s govt was even stupid enough to say there was no “intel” on the attacks. Now this just blew the lid off.  You have Modi, the most targeted politician in India. You have lakhs of people at the rally grounds. You have lakhs of people moving around in the city trying to reach the Maidan. You have people at Bus-stations and Railway stations. Did you not expect serious security issues and threats? Are you that dumb that you claim you need an intel report? And our channels typically debated this so called nonsensical intel report. The only one to point out that in such a case no one even needs an intel report was former Home Secretary RK Singh. It’s like my guests did inform me they were coming but they didn’t tell me they will have tea. So, I didn’t get milk!
The usual ‘smart guys’ at NDTV and CNN-IBN were discussing who will benefit from the blasts. It is only Arnab Goswami who asked the most important and appropriate question. What if the same thing had happened at a Nitish rally in Ahmedabad? You can easily guess. Headlines would have been “Attempted assassination”, “Nitish targeted in Gujarat”, “Modi must resign”, “Modi fails security for Nitish rally” and many more.
The awesome truth is that Narendra Modi and the BJP leaders demonstrated extraordinary skill and presence of mind. Their own lives were in danger. They demonstrated extraordinary “Calm under fire”. Such calm doesn’t come from weak leaders and pretenders. They not only went on with the rally but ensured no major disaster with the crowds happened. Not just that, not one BJP leader even mentioned the blasts or tried to point fingers or take political advantage of the security failures in their speeches. It was passing a test with honours. It was courage under fire. Such people are the ones you can trust your country and security with. The Biharis at the Maidan set an example for the whole country to admire and follow in times of crisis. Not one media person recognised this phenomenal courage by ordinary folks. What the country really saw was a “Miracle at Gandhi Maidan”.
By Tanay Chothani|2013-11-01T13:23:00+05:30November 1st, 2013|Categories: BJP, Narendra Modi, Political Parties, Politics|Tags: Arnab Goswami, Bharatiya Janata, Bihar, BJP, Congress, Digvijaya Singh, Gandhi Maidan, Good Governance, Hudson, Media, Miracle, Modi, Narendra Modi, Nitish Kumar, Paid, Patna, Rajdeep Sardesai, SOcial, The Debate|1 Comment