When I was in my ninth standard, I read a quote of an eminent personality in our compulsory history book that sent a shiver down my body and mind. That great personality was none other than Pandit Jawaharlal Nehru, the first Prime Minister of ’Independent India’, whose voice was heard over All India Radio on that much awaited midnight of August 14, 1947, announcing, “Long year ago, we made a tryst with destiny, and now the time comes when we will redeem our pledge, not wholly or in full measure, but very substantially. At the stroke of the midnight hour, when the world sleeps, India will awake to life and freedom. A moment comes, which comes but rarely in history, when we step out from the old to the new, when an age ends and when the soul of a nation, long suppressed, finds utterance…. We end today a period of ill fortune, and India discovers herself again.” 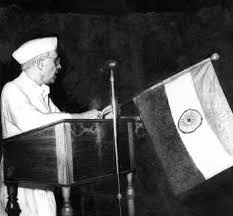 After 67 years have passed with varied colours, India has also been gradually growing from its nascent stage each day. Now, standing on the 68th year of its valued independence, I would like to draw your kind attention towards some issues that have been haunting me.The first and foremost issue that occupies frequently is how independent we are in reality and whether we are really independent? Before Independence, we were ruled by the Britishers; for every purpose, we had to bow down in front of the foreign power. After much bloodshed, we got independence from the British, but undivided India was broken into two dominions – India and Pakistan. Every five years, we, the proud citizens of India, cast our votes and elect our representatives in the Parliament (the very citadel of democracy) and in the legislative assemblies. But the overall procedure of election is well known to us. Except for some major cities in India, especially where the ratio of highly educated and socially-conscious people is higher than in other areas, election is considered neither a fair nor a peaceful event in the rest of our country. Booth-jam, rigging, terrorising the common masses to remain away from casting their vote and various other malpractices take place in order to secure maximum seats in those socially and economically backward areas. Casting a vote pressurised by some goons is equal to staying inside a prison and acting like convicts.

After 67 years of independence, the Central government has failed completely to fulfill three basic needs of the common people – food, clothing and employment. At least 9.05 per cent of youth community are still fighting against ’unemployment’. According to the latest statistics of a NDTV survey, one of two graduates are unemployed or employed in jobs giving them a monthly salary of less than Rs.25,000, much below their capability. Yojanas after yojanas arrived, a number of policies and plans were executed, but the water has remained stagnant.

Our Central governments as well as state governments shout a lot about development, but that is very much limited within the boundaries of the metropolitan cities like Ahmedabad, Delhi, Mumbai, Kolkata, Hyderabad, Bangalore, Chennai and a few more. But what about the villages?

Shortage of pure drinking water comes first in this list. May be the residents of metropolitan cities get volumes of drinking water regularly through municipal corporation but those who dwell in the remote villages, strive daily for a bucket of fresh drinking water.Everyday, women in groups from these places cover a long distance just to get one or two buckets of drinking water, and the water in usafe and unfit.

Electricity is the next issue. India is a country consisting of over six lakh villages. But alas! After sunset, a major percentage of Indian villages go under an impregnable curtain of darkness due to lack of electricity. Thermal power, hydro power, nuclear power…so much power, but still a large portion of Indian population lives without electricity.

Surat is known as the Manchester of India; Reliance , Gwalior, Shiyaji, DCM, Raymonds are some of the renowned Indian garment factories, whose name are well known throughout the world for their quality product as well as standards. Don’t these companies have any extra rags to cover the shame of their brethren?

If you go through the streets of the metropolitan cities at night, you’ll find a number of homeless sleeping under the sky after day long hard work. Each day, these homeless come to your house to clear your dustbin, to clean your car or to polish your shoes. But we fail to provide those, with whose help we all are moving faster, a shelter. If your air conditioned car stands near a red light in a busy road, little hands holding some noted magazines appear outside the film-coated glass, begging for some money to have a piece of bread in lieu of these books. Girls fear to come out alone in cities as well in villages at night as they anticipate rape and molestation. Children are kidnapped for money; people vanish and then their dead bodies are found without kidneys and other rare organs. Blinded by religious fanaticism, one community mercilessly kills the other and pose as if they have done a feat.

So, are we really independent? We were under the bondage of British, and now we are under the bondage of poverty and darkness. If we are really free, then why are we still under the curtain of poverty and backwardness? Crackers worth of millions will be burnt on the eve of 68th Independence Day, hope all the scars of negativity will be wiped away by the light and sound of firepower. Hope a new India, a real ’Independent – India’ will take birth again.